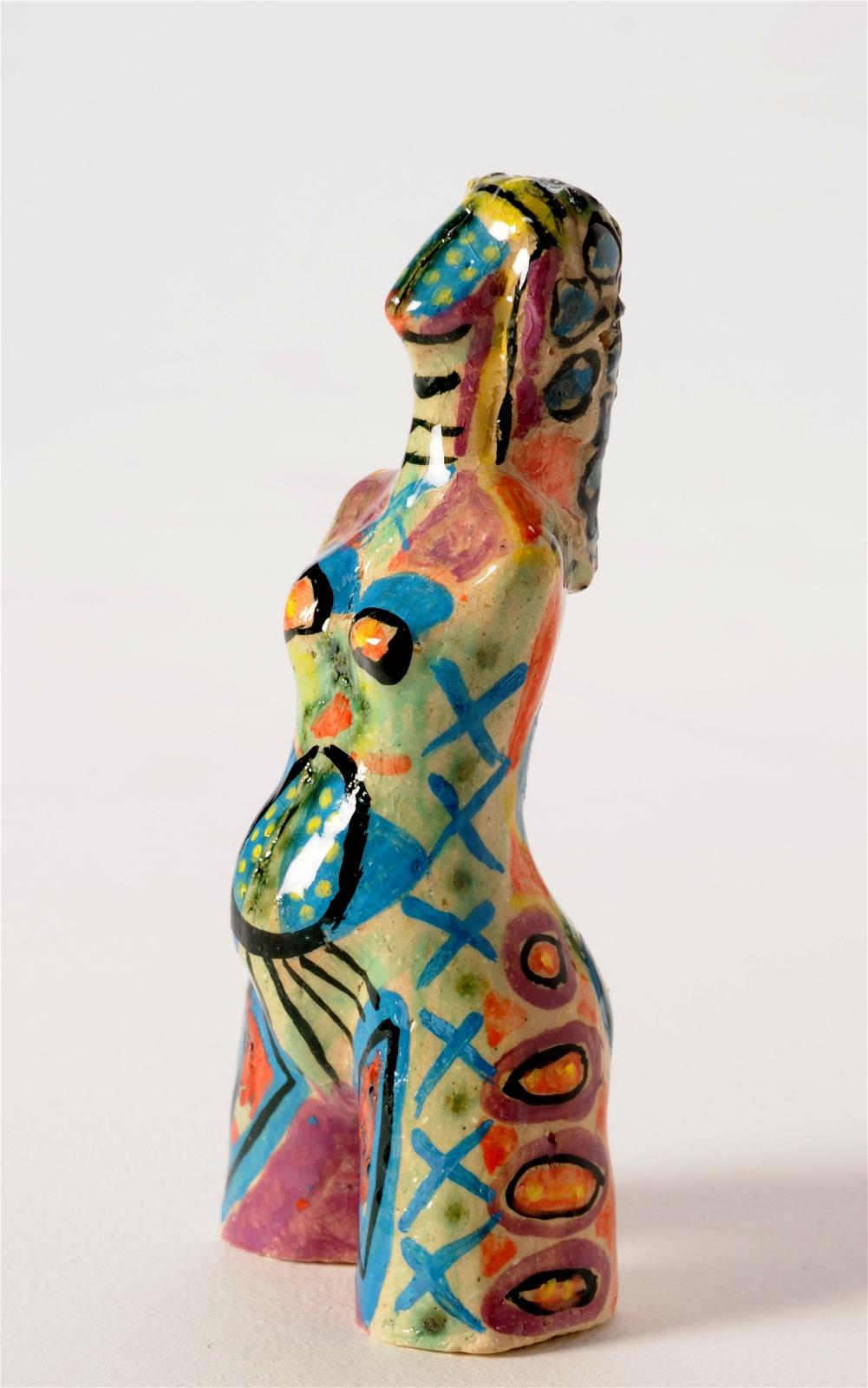 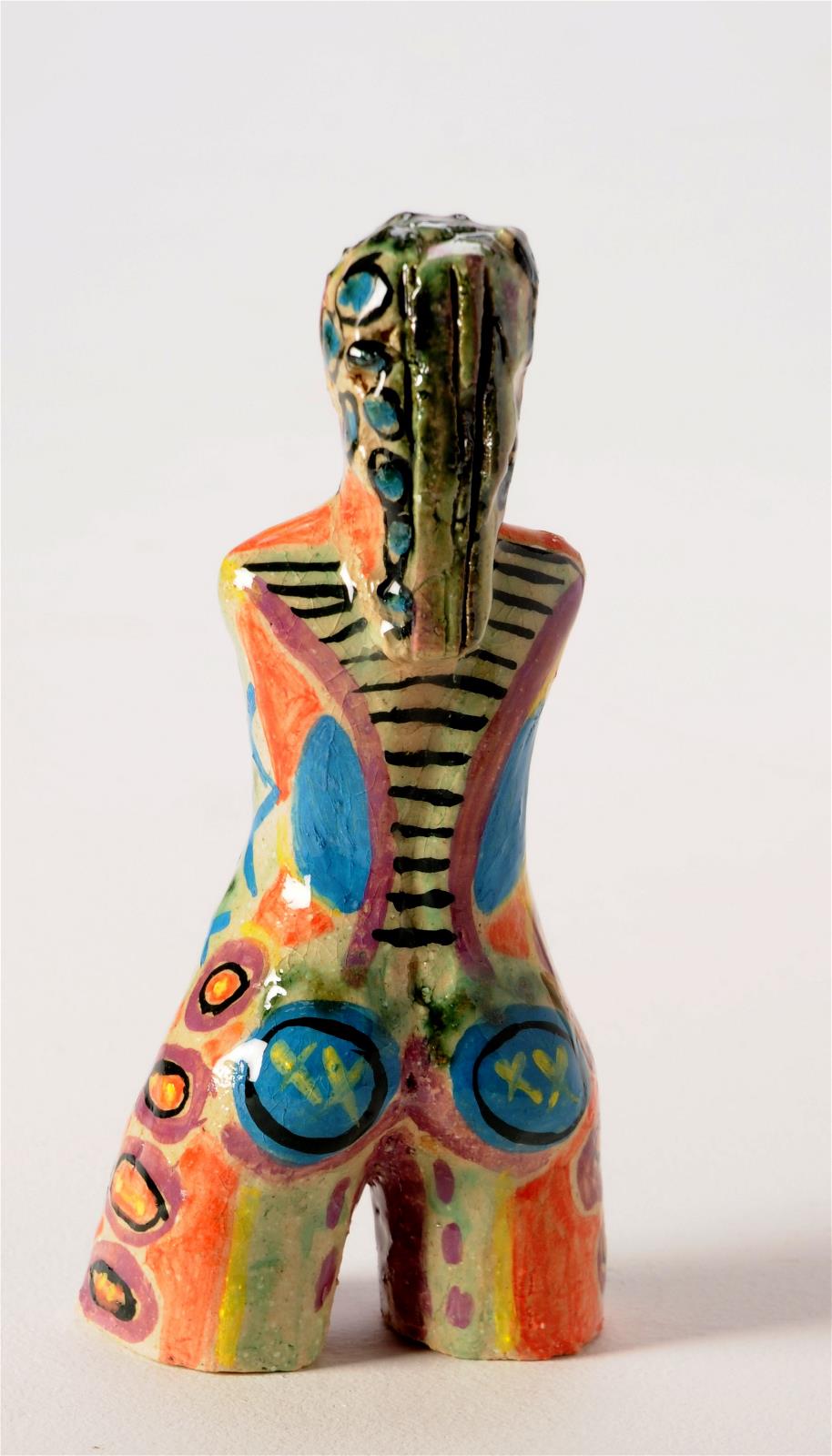 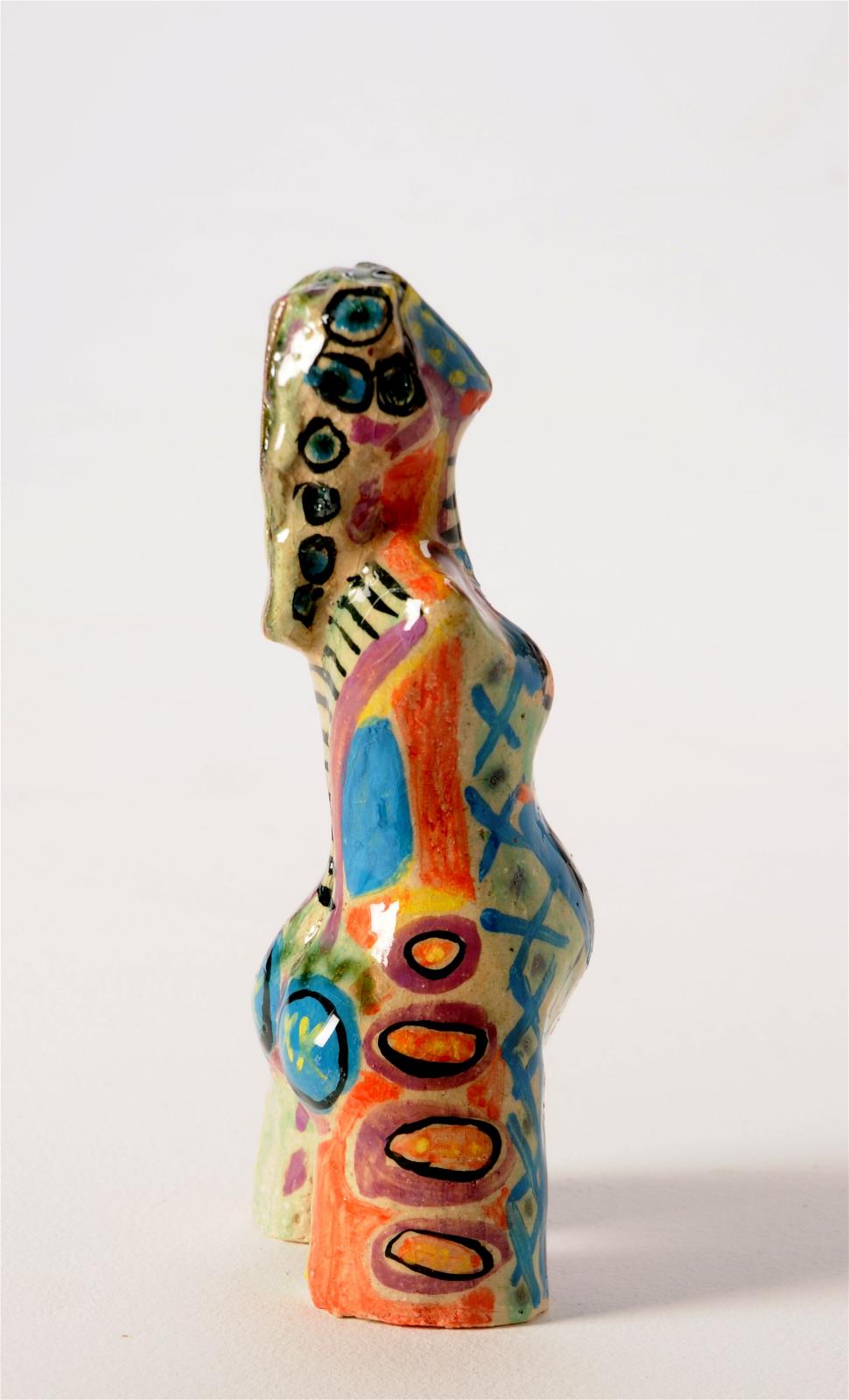 By June 2020 I was desperate for some colour and some optimism! I made six very small Lockdown Ladies, again using the stoneware paperclay that I love. I used a white slip on the surface so that the underglaze colours would look as resonant as possible. This very small figure, with her confident stance, her spontaneous pattterns and her gorgeous colours, embodies the joy of the natural world and hope that at some point things will get better. Finding the joy in small things.

“The second piece I would like to commend is ‘Lockdown Lady 2’ for its sheer warmth and exuberance in the face of this pandemic. The ceramic piece has real joy in its making and an openness and pleasure in its handling of colour. the lightness of touch and sense of immediacy and life is palpable in the surface of its work. This spark of light and colour is something we all need to keep us going and this small work shone like a beacon of hope amongst all the submissions. Many Congratulations to Eilean Eland. ”

I am a ceramic sculptor, working from my home studio in North Devon. My work is semi-abstract, organic and textural, with an emphasis on form and 3D qualities. My current focus is the female form. I ask myself the question: ‘How can I, as a woman, represent the female form today’. I want to make strong, determined, individual and sensuous figures, from a female perspective.

For the larger pieces, up to 60 cms, I hand build hollow, using very thin coils, but the smaller ones I make solid and hollow as needed. I mostly use grogged stoneware paperclay, but sometimes grogged porcelain for the small ones. Slips and oxides are used on the surface and pieces fired as needed to get the effect I want.

My initial degree was in Fine Art (Sculpture) where I worked in clay but then cast work into fibre-glass etc. In the 1980s I established a sculpture studio with funds from RNIB to buy a kiln and I began to explore how clay could be used as a permanent medium itself. This has been a slow process with a full-time academic job, children etc, but since taking early retirement and moving to Devon in 2006, I have worked to develop an individual creative voice. Influences include Picasso (especially the heads of 1932), Giacometti, Gordon Baldwin, Betty Woodman, Philip King (having known his metal sculptures as a student I was thrilled to see his large clay pieces), and Kathy Venter, whose studio near Vancouver Island I visited recently. In finding with way with ceramic sculpture, I have followed a number of courses with Sandy Brown, which have been invaluable, and she remains an inspirational mentor.

I completed a degree in Fine Art (Sculpture) in 1967 and during the last year was selected to exhibit in the Young Contemporaries Exhibition at the Tate Gallery. I exhibited in and around London for twelve years, including at South Hill Park, Bracknell where I built a large play sculpture, while teaching at Holland Park Comprehensive School, the Cockpit Arts Workshop in Marylebone and the National Portrait Gallery.

In 1980, I took up a full-time lectureship in Museum Studies at Leicester University. I was invited to establish a ceramic sculpture studio in the Department of Adult Education and taught an evening class there for ten years, but my main effort went into building Museum Studies as a discipline, eventually becoming Head of Department, Professor (Hooper-Greenhill) and founding Director of the Research Centre for Museums and Galleries (RCMG). I enjoyed this work a lot, but I didn't get much time to develop my art practice!

I moved to Devon in 2006 while continuing to work for the University at a distance. I am not a trained potter but knew that I wanted to use clay to make work and had developed some experience with the classes for blind people at Leicester. As part developing my skills, I initially followed evening classes run by Helen Bailes and Geoff Ambler, then a one-week course Creativity is Play with Sandy Brown. Later I spent a day, and then a week’s course with Vanessa Hutchinson at Sandy’s studio learning about paperclay.

I have gradually and slowly worked out, through the making, what it is I want to do. It hasn't been fast, but I have had a few successes along the way: I was awarded Second Prize in the South West Academy for Fine and Applied Art (SWAc) Open Exhibition 2013, Exeter, for one of my small female porcelain figures (Ice Age Matron 2). I exhibited at Gloss Gallery in Exeter until it closed in early 2015, was elected as an exhibiting member of the Westward Ho! and Bideford Art Society in 2017, and have had work at exhibited at Portland Gallery in Ilfracombe, West Down Sculpture Gardens, Bradworthy, and Jill Rousseau Gallery, Bideford, where I was one of her first Artist Showcase artists. I was Chair of Appledore Arts from 2011-2013 and am currently Chair of North Devon Arts. I am a member of West Country Potters.